My father Ernest Bruce Bendelow’s mother and father both came from Scotland to the United States. He father’s father came in 1892, his mother’s in 1903.

My father’s mother, Mary (Mae) Loudon Gibson (1896-1977), and her family came from East Ayrshire, a green region of rolling hills south of Glasgow, Scotland. Their town was Dalmellington. 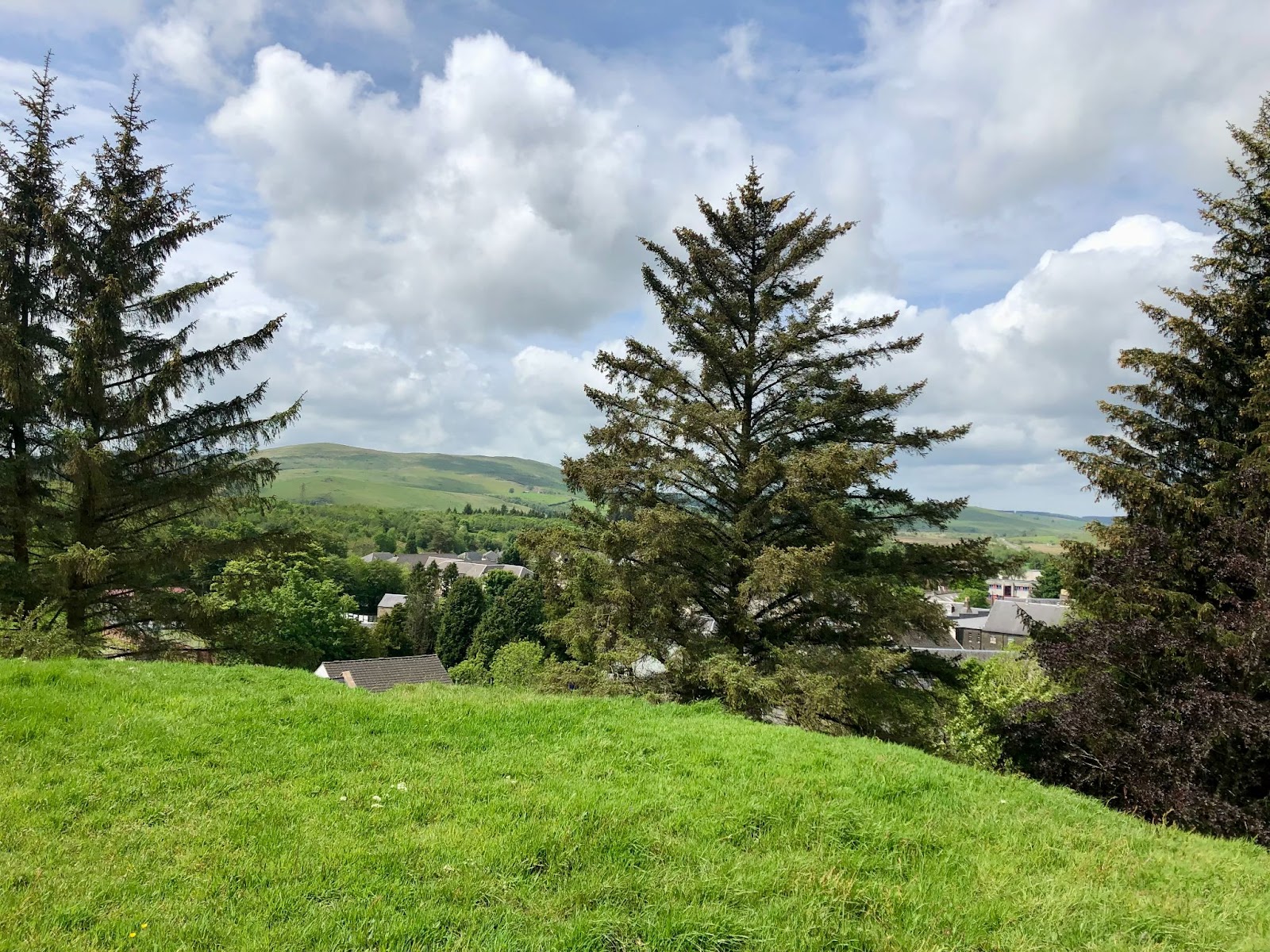 The photo above is from a high point in the village, which my sister Sarah and I visited in 2019. Dalmellington lies in the Valley of the River Doon, and the famous Broadway musical Brigadoon took its name from a bridge over it.

The Gibsons, according to records, were rural “builders”–general contractors who constructed cottages, barns, and houses. Here is a photo of the Gibsons of Dalmellington, circa the 1880s. 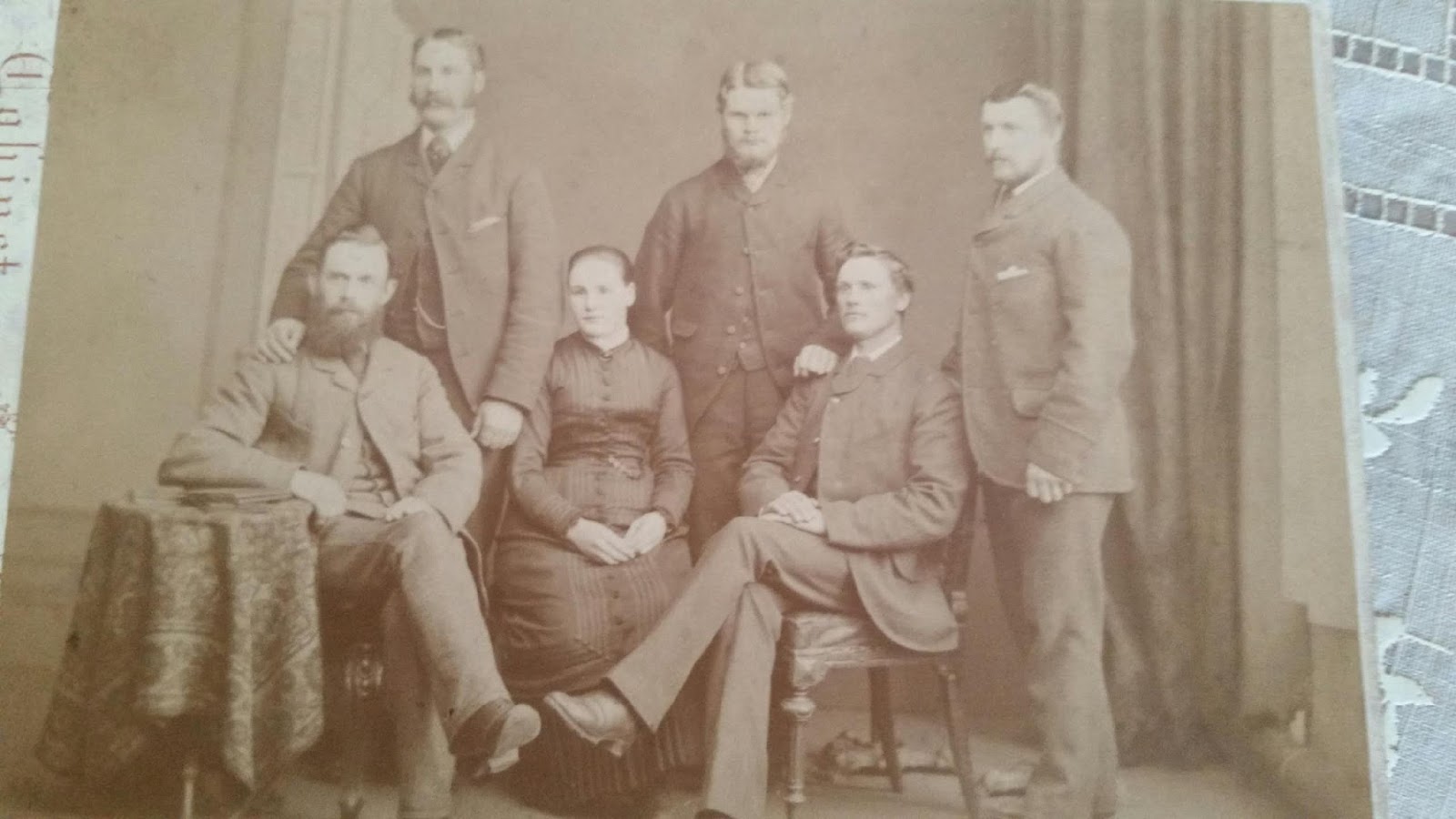 Andrew Gibson (for whom I am named), my grandmother’s father, is one of the three men to the right side of the photo.

I like to think that I inherited some of the constructive energy of these Gibsons. Look at their faces. They seem impatient to get back to the scaffolding. Maybe that has helped me devote long hours of tedious exertion in pursuit of projects like maintaining a successful cleaning business and developing highly-proficient high school teaching skills.

Masonry is the job Andrew worked in Chicago during the first three decades of the 20th century. According to Mae’s sister, Jean (VanNatta), he worked on some great buildings, including the Tribune Tower at Michigan Avenue and the river. She remembered him leave early in the morning, taking the streetcar to jobs around the city.

Jean and Mae’s brother John was also a Chicago working man. He made his living as a house painter, and he and his family were our Oak Park neighbors. I can recall at least one visit he made to his nephew’s, my dad Bruce’s, South Scoville home, talking jovially while drinking coffee and chain smoking. He died in his fifties of lung cancer.

My father’s great-grandfather John Bendelow, ran a popular pie shop in Aberdeen, Scotland, where his son, my great-grandfather Thomas was born in 1868. The first American in my father’s lineage, Thomas grew to be a famous golf architect (and so-called “Johnny Appleseed of Golf”) in the United States. When he arrived in New York in 1892, he began work as a type-setter for the New York Herald before giving golf lessons, and then branched off into designing golf courses. 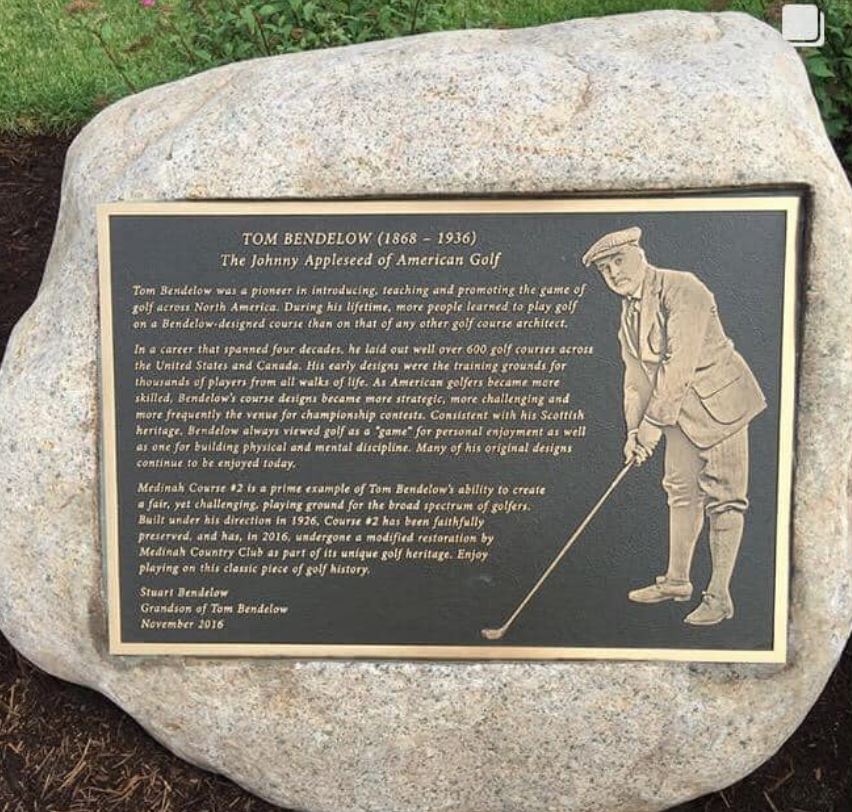 Although Thomas posessed no more than an elementary education, he apparently had an indefatigable work ethic and a set of strong beliefs in the faith of the Plymouth Brethren, in whose Aberdeen assemblies he was raised. Perhaps some of my constructive and dogmatic tendencies come from him.

My father grew up in houses on Franklin and Park Avenues in River Forest, Illinois. He was taught in its public schools and later at Oak Park and River Forest (OPRF) High School, where he graduated in 1949. His mother and father’s family, and thus his and subsequently our family, were devout Plymouth Brethren .

This particular group of Christian protestants took a de-institutionalized, rather democratic approach to faith from their beginnings in 1820s Dublin. The original brothers (“brethren”) met outside the official church, in private homes. They were rebels, defying the authority of the Anglican church to prescribe what the Bible meant, and trusting instead on their own prayerful interpretations of holy scripture (sola scriptura).

Perhaps because of their entrepreneurial, individualist ethos, the PB were very successful in advancing their version of protestantism in the US. Their doctrine of dispensationalism became one of the core beliefs of 20th century fundamentalist protestantism. (A previous post has an overview of dispensationalism’s influence, in case you’re interested.)

While the PB ordain no clergy, they still offer a formation for young Christians at Emmaus Bible College, and when I was 17 and 18, members of our church encouraged me to defer normal college degree and instead get a Bible degree at Emmaus, conveniently located near to where both my father and I grew up, on Oak Park Avenue, just north of Lake Street.

The pressure I felt to attend Emmaus at this time was probably one of the reasons I sought to escape the US via an exchange-student program. I was secretly torn at age 17, attending my PB assembly weekly, a likely prospect for Emmaus, but in my mind, as I’ve related elsewhere, I longer believed in the sect’s core tenets.

My mother’s family in America goes back to the south on her father’s side, Virginia, specifically, to the 1700s. It includes English, Irish, and French Huguenot roots. Among my grandfather Rufus A. Colgin’s ancestors was the so-called “Father of Modern Oceanography and Naval Meteorology” Matthew Fontaine Maury, for whom my sister Sarah Fontaine was named.

Unfortunately, on my mother’s mother Mildred’s side, not much is known. She must have had German lineage, since her maiden name was “Adelman.” All that we know for sure is that Mildred’s family were itinerant farmers who had been in southern Illinois at one time, and ended up in Oklahoma, where she settled after a failed first and childless union. It was in the southwest that “Mimi,” as the my family called her, met Rufus, also divorced with one child from his previous marriage. He was working in the oil industry at the time.

Rufus’ child with his first wife, my mother’s step-sister Doris, became my siblings’ and my dear Aunt Doris. She lived long past my mother’s death and was especially close with my sister Sheila.

Rufus was a journalist as a child in his small Texas town (he wrote, edited, published, and distributed news for his neighbors). This entrepreneurial streak of his, along with the ability to speak clearly, learn languages, and lead from behind a positive, soft-spoken visage have, I believe, been passed down to a grateful me.

After they both were dead, Rufus and my father hung out with me one night in a nebulous dream environment. The three of us are floating weightless together in what seems like a sunny cloud bank. Rufus smiles down at me as he did in life, a twinkle in his blue eyes. My father silently smiles at me, too. No words are spoken, but when I look closer, I notice that they both are wearing clown shoes and get this message: “Don’t take things too seriously, Drew.”

To this day, I feel loved and empowered by this kind man, my mother’s father, whom I called “Papa.”

Both sets of my grandparents were devout evangelical Christians, and they each sent their progeny to the same school located a scant 20 miles from my father’s parents, Wheaton College (established in 1860). The “Home of the Crusaders” must have been perceived as a safe place in 1949, a place evangelical parents could safeguard their kids from a sinful world, while still getting them a bachelor’s. Evangelist Billy Graham, minister to American presidents, was Wheaton College, class of 1943, a mere seven years before my parents met there in 1950.

Before long, alas, my mother, a political science major one year younger than my father, was asked to leave for allegedly breaking curfew and smoking, serious violations at Wheaton College. My father decided to drop out with the young woman he’d settled on–Patty Sue Colgin–, ready to propose marriage and follow her back to Tulsa, Oklahoma, her hometown.

He was drafted into the United States Marine Corps prior to their marriage (1950), and they were wed while he finished his basic training. While in Korea, my oldest sister, Susan Diane was born in 1952.

When he emerged from the service in 1952-53, my father earned a degree (in marketing) from the University of Tulsa, and worked for some time as a salesman before joining his father in his advertising art studio in Chicago’s loop. His office was on Wabash Avenue near Wacker Drive.

By the time I was born, my parents had started a home in Maywood, Illinois, then moved to Oak Park, Illinois, and established what might have appeared as a potentially happy American home in 1961.

Our home on north Elmwood, photographed in 2019, the scene of my emergence into this world.