One of the joys of Bob Dylan’s 80th birthday has been the proliferation of Youtube performances of songs in the vast Dylan oeuvre by famous and amateur performers across the globe. I’m sure other Nobel literature laureates have inspired their readers (or, if poets, their listeners) to perform the author’s works in response to the award, or to feel emboldened to showcase their own creative responses to an author’s work. But Dylan songs, from their plain-sung beginnings in 1961, have provided something different to his audience:  songs whose musical simplicity and deliberate roughness seem to invite interpretation by others. With many of his studio recordings, and his mercurial live performances, he seems to be implying, “This is how I do the song. I invite you to try it differently.”

Or as he puts it on “Absolutely Sweet Marie,”

These performances show just how widespread Dylan’s DIY message has been received.

Take this one, for example, a fundraiser from Montclair, New Jersey. It has renowned performers like Nils Lofgren, Richard Thompson, Bill Frisell, Robyn Hitchcock and his partner, Emma Swift.  And it’s fun to hear their gratitude to Dylan for his body of work and what it has meant to them. Swift does a dramatic parlor lied performance of “Visions of Johanna,” and thanks to Semisonic’s Dan Wilson, you can appreciate a relatively obscure outtake from Blood on the Tracks (1975). The song titled “Up to Me” sounds like an inverse version of “Shelter from the Storm” (so you understand its rejection), but it contains these lyrics, which could be read as Dylan’s self-disclosure that his work was the result of stubborn lack of compromising his muse, what elsewhere he has called “the spirit of song”:

If I’d thought about it I never would’ve done it, I guess I would’ve let it slide
If I’d pay attention to what others were thinkin’, the heart inside me would’ve died
Well, I was just too stubborn to ever be governed by enforced insanity
Someone had to reach for the risin’ star–
I guess it was up to me.

Another really worthwhile birthday tribute comes from the US Ambassador’s residence in Dublin, Ireland.

If you’re a US fan, you probably haven’t heard from many of the performers, but there are some wonderful interpretations and creative forays to check out, like the spoken word performance by Nigerian-Irish poet Felicia Olusanya (FeliSpeaks) based on Dylan’s “Dignity.” Her passionate interweaving of Dylan choruses with her fresh verses show how timeless (alas) his invocations for justice are, but also how generative his songs are for today’s performers 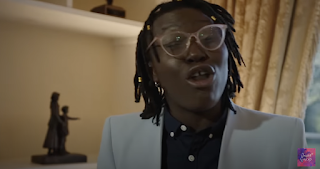 Also notable in this 80-minute event are Paul Brady‘s performance of “Arthur MacBride,” an Irish ballad that Dylan covered in his Good as I’ve Been to You collection. It is introduced by Star of the Sea author Joe O’Connor, who reads a passage that retells the anti-war narrative set on Christmas morning.
Still another sample of these spontaneous global tributes comes from Berlin-based Trailhead Music, and features  a variety of amateurs and professionals from around the world paying tribute to the catalog of the man Spanish artist Juan Duran calls “the father of singer-songwriters everywhere.”
Notable here are Duran’s “Simple Twist of Fate,” Bernd Bockmann’s “Love Minus Zero/No Limit,” and Nashville-based Stephen Simmons’ “I’ll Be Your Baby Tonight.”
Check out this video featuring Dutch artists, and this one, performed by 15 Austin, Texas-based musicians.
I’d like to think that since he’s not touring this summer, the 80-year old laureate might take a break from his other artwork and sing along with his songs, marvelously varied in their interpretations by some of the countless people across the planet whom his work has moved.