Book Review–Vonnegut's Cat's Cradle: a primer on the technology of religion and other technological musings 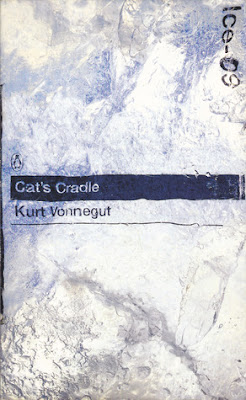 One of the delights of older age is being able to re-read books you remember fondly from youth; these books hang on high shelves of honor in your memory, but since it has been decades since you dipped into them, you have only the vaguest recollection of why it is a quality book. Sometimes the later reading reveals flawed work, but in re-reading Kurt Vonnegut Jr.’s Cat’s Cradle, I discovered a vibrant and compelling satire with continuing relevance.

When my English 11 team decided to work this book into its curriculum for next fall, I was pleased. I had considered it one of his better books (having gone on to read everything I could find by the author after reading this book in 1977), but I could not have given you any specific reasons for my enthusiasm, no details of its brilliance.  Having freshly re-read it, I can fill that gap.

The book is interesting in that it gives a fair amount of autobiographical substance. Vonnegut’s narrator is practically indistinguishable from the young Hoosier writer who published this book in 1963–except of course for the science fiction occurrences that befall him. The novel has a very period-specific feel: Cold War, armageddon-paranoia–the same milieu in which Stanley Kubrick and Terry Southern wrote Dr. Strangelove. And the novel has a similar plot, in which scientists and military men create big problems for humanity.


But the theme in Vonnegut’s book that I wanted to extoll here is that of the technology of religion [a concept that would have been very dangerous to me as a 16 year old in a religious home]. On the isolated island of San Lorenzo, a ship-wrecked sailor creates his own religion, Bokononism. The creed is officially banned, but all of the inhabitants of the island–even the Christian missionaries–cannot resist its appeal.  Bokononism is a self-conscious, post-modern faith, one that acknowledges absurdity and irresolution in human affairs, encourages compassion and calypso singing, and has as one of its central sacraments worshippers pressing their bare feet against those of a fellow worshipper.


Bokonon knows that inside every human there is a unquenchable thirst for resolution, or cognitive consonance, and regardless of how one has to distort observable reality to make it fit, humans are hard-wired to find answers to life’s ironies. One of  Bokonon‘s calypso’s states man’s natural disposition:

According to this text, in a world with horrible realities, the best religions are those that most effectively explain the horror, the ones with the most satisfying narratives. Bokonon “playfully” and “cynically” creates his religion as a deceptive opioid for the people; since “no governmental or economic reform was going to make the people much less miserable… religion became the one real instrument of hope. The Truth was the enemy of the people, because the truth was so terrible.” In response to their error and suffering, Bokonon creates a satisfying system:

I wanted all things

To seem to make sense,

So we all could be happy,

yes, Instead of tense.

And I made up lies

So that they all fit nice,

And I made this sad world A par-a-dise.

The role of religion, then, is to “provide the people with better and better lies.” Bokonon calls the stuff of religion–these harmless lies–foma, and urges the follower to choose wisely the falsehoods that will–necessarily–guide his/her behavior. The main commandment of the faith is pluralistic and existential–what matters is not the dogma, but the behavior that it engenders. Bokonon implores his followers to “Live by the foma that make you brave and kind and healthy and happy.”  A simple, happy, and extremely popular religion is Bokononism. We’re told that the faith gives one “the belief that God [is] running my life, and that He had work for me to do,” yet it is a church that is refreshingly honest about humans.The Fourteenth Book of Bokonon is called, “What can a Thoughtful Man Hope for Mankind on Earth, Given the Experience of the Past Million Years?” Vonnegut tells us, “This is the only book which we have in its entirety. Its contents are as follows: Nothing.”
But Vonnegut’s book also comments on some other technologies:
On the technology of fiction writing (another trade in foma):
Writers, like saints, need to communicate convincing lies (foma) to be popular, and yet, to have integrity, must acknowledge the futility of their efforts. Writers act on “the central premise of Bokononist thought,” we are told, “the heartbreaking necessity of lying about reality, and the heartbreaking impossibility of lying about it.” Like religionists, the fiction writer alleviates pain and makes civilization possible:

When a man becomes a writer, I think he takes a sacred obligation to produce beauty and enlightenment and comfort at top speed.”

“I just can’t help thinking what a real shake up it would give people if, all of a sudden, there were no new books, new plays, new histories, new poems…”
“And how proud would you be when people started dying like flies?” I demanded.
“They’d die more like mad dogs, I think–snarling & snapping at each other & biting their own tails.”

On the technology of war:

“Perhaps, when we remember wars, we should take off our clothes and paint ourselves blue and go on all fours all day long and grunt like pigs. That would surely be more appropriate than noble oratory and shows of flags and well-oiled guns.”

On the technology of cleaning:

“…The brainless serenity of charwomen and janitors working late at night come over us. In a messy world, we were at least making our little corner clean.”

In sum, this is an entertaining and thought-provoking read; in its pages the contemporary reader will recognize our society’s blind faith in science, the military and religion.