A fun new way of using Twitter in English class was started last week by @Thenerdyteacher, Nicholas Provenzano of Michigan, who came up with a Twitter ID (@realtimegatsby) to go along with his class’ reading of the 1925 classic of American literature. I love the way he is able to use modern communication tools to convey insights into character and plot. Here is a screenshot I took when I first discovered it: 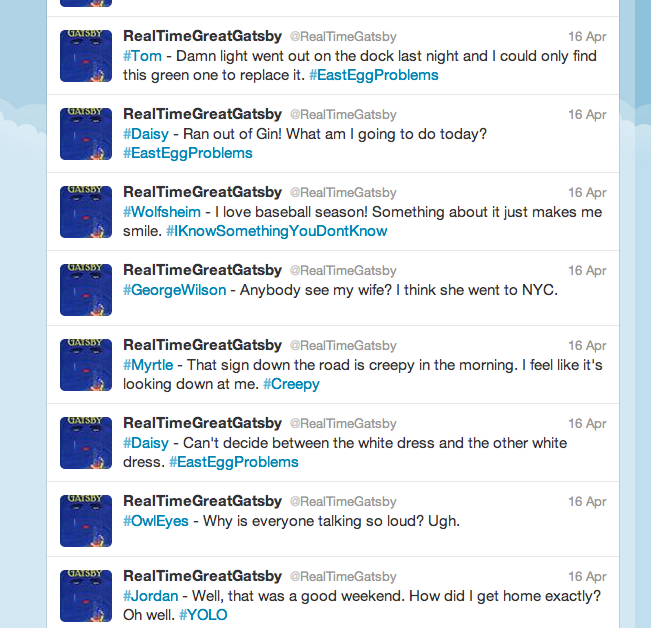 Since my students are currently attaching #YOLO to everything, and their facebook pages feature #firstworldproblems, the humorous connections were immediately appreciable.

Since our curricular questions deal more with the novel’s criticism of the American Dream and notions of success (as well as symbolism) and less (as Provenzano’s students seem to) with characterization, I realized that I would have to tweak it the prompt so that they could offer up their own tweets to @realtimegatsby. So I gave those interested in tweeting (and only about 20% of my juniors had an account) to simultaneously tag @realtimegatsby in a tweet and show that they understood Chapter 3 of Gatsby.  Here are some of the encouraging results:

#nick #yaleclub What a bore! All I can do is study investments and securities #smartpeopleproblems @RealTimeGatsby
#guests Going to a party 2night @ this guy Gatsby’s house. Idk who he is but there better be booze #takingadvantage #prohibition @RealTimeGatsby
#jordan Gatsby an Oxford man? Really #suspicion #liar @RealTimeGatsby
@RealTimeGatsby #nick this is an usual party for me. I haven’t even seen the host #partiesthesedays
@RealTimeGatsby #Jordan I like large parties. They’re so intimate #partyanimal

Anything that gets kids thinking about challenging texts they’re reading and communicating their understanding to others is a great idea, but Nick’s idea is totally propitious, too, coming right at state testing time (#winning, #happycoincidence).

I’ll offer this same tweet from the character’s persona option as we finish Fitzgerald’s book, and set up the Holden Caufield tweetstream and see what comes of it during our final novel of the school year.