The Art of Racing in the Rain, reviewed

The Art of Racing in the Rain by Garth Stein is a magical and satisfying book about the bond between a good dog and humans. Told from the dog’s perspective, its philosophy is useful to any of life’s problems, but comes from one of the dog-owner’s racing precepts (he is a Formula One driver):  “That which you manifest is before you,” or, put into car-racing context, “The car goes where the eyes are looking.” 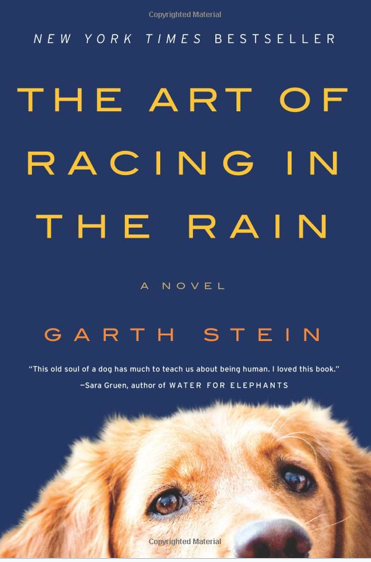 In other words, if you are only looking at the obstacle or difficulty directly before you, then you have nowhere else to go; you will find yourself in trouble. But if, like a good Formula One driver, you have studied the course and can anticipate the next turns and the responses of the various drivers and teams around you, as well as the environmental factors (like rain), you can put your mind on what is beyond the difficulty, to the victory.  As Enzo, the dog, puts it, “”Racing is about discipline and intelligence, not about who has the heavier foot. The one who drives smart will always win in the end.” The message of living intentionally comes through very well, and there is also plenty of dog-wisdom for human affairs, earned from the perspective of four-feet on the ground and a tongue and voicebox that cannot produce words. Enzo has also watched plenty of TV, and learned much of humanity thereby.  In Enzo’s cosmology (which he gets from a National Geographic channel documentary on Mongolia), a dog who is sufficiently evolved will reincarnate as a human. And Enzo has seen enough of bad human behavior to know what he will be like in his next life. He says,


Here’s why I will be a good person. Because I listen. I cannot speak, so I listen very well. I never interrupt, I never deflect the course of the conversation with a comment of my own. People, if you pay attention to them, change the direction of one another’s conversations constantly. It’s like having a passenger in your car who suddenly grabs the steering wheel and turns you down a side street….Learn to listen! I beg of you. Pretend you are a dog like me and listen to other people rather than steal their stories (102).

The book has a made-for-Hollywood plot line concerning the race-car driving owner and his difficult relationships, as well as detailed scenes set in Seattle, Washington and various race-tracks and plenty of “inside racing” knowledge. But what will resonate for thoughtful readers will be the wisdom that thoughtful dogs can bring to human affairs.  I recommend this book to readers older than 12 because of adult language and themes.