AFT President Randi Wiengarten delivered a letter to her 1.5 million dues-payers this Labor Day weekend. And there is something of a general’s message to the troops in her words. At a time when it could be said that American labor is in a death struggle against those who see it as corrupt and outmoded, her letter is a literary weapon, inspiring the embattled teacher as Thomas Paine’s pamphlet did at our republic’s inception.
According to the Gallop poll of American public opinion (graphic below from a site with shady unfiltered comments), Americans are now about evenly divided on the idea of working people organizing for their own and (one hopes) the work’s benefit. Look at how, in the 70 years since the last Great Depression, the lines are consistently diverged, in labor’s favor. Then in our moment they suddenly converge, bump off each other into the en garde poses of today. 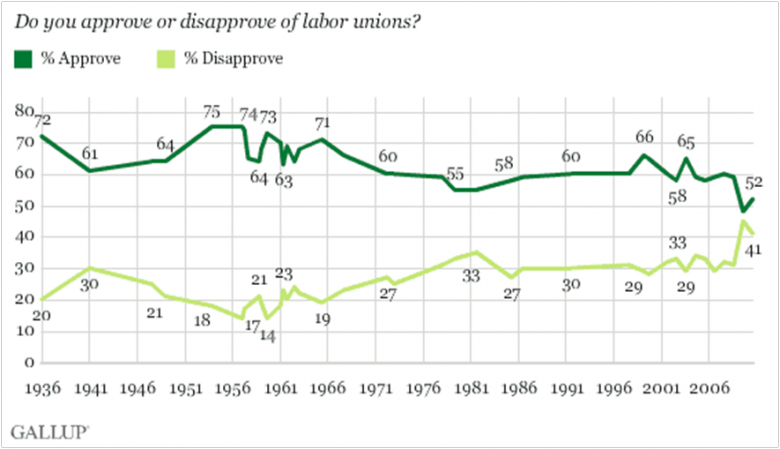 The American people, it seems, no longer feel sure that letting labor interests balance the greed of bosses is such a good idea. Interestingly, in time of their greatest economic expansion, they were sure. In the Eisenhower administration, there was an almost 60% differential in favor of unions! But in the new Depression folks have lost much of their faith in labor. And so for labor, the policy death match (the societal “fight at the waterhole,” I called it in an earlier post) goes on.
In a policy war, you bring your best rhetorical weapons, and I think Ms. Weingarten, or whoever is responsible for her words, earned their pay today.  This message for Labor Day (Easter of the Labor Calendar) works like a good papal homily in St. Peter’s Square: inspiring the faithful.

Its use of the pathos and ethos is remarkable. Notice the sudden start, the way it grabs attention, implying a crisis. And check out the way her consonants smoothly transport the union member to an historical perspective, to his/her place in a long line of honorable working men and women (such as Chicago’s Haymarket martyrs, founding labor “saints” of  this weekend’s holiday):


Thank you. To all of you who work, who have worked, or who look every day for work, thank you. Our country, and the dream generations have built their lives and their hopes for their children upon, exist because of your labor and the labor of your parents and their parents before them.

Weingarten builds on the lineage of her audience in the letter,reminding them of a proud lineage. She only goes back to labor history 100 years ago, but one could trace it back to Chicago in 1886):

America’s unions are the product of tough times, and they are built for tough times. From the Triangle Shirtwaist Factory fire 100 years ago to the demonstration of democracy in action throughout Wisconsin this year, ours is a proud history of grace, grit, perseverance and progress. The fight for economic dignity, collective voice and a check against unfettered power is as important today as ever before.

She further inspires the union teacher’s sense of him/herself as an agent of change in society, positioning the job at the very center of America’s narrative:

The AFT occupies a unique position at the nexus between public education as the equalizer of individual opportunity, and the labor movement as the leading advocate for economic dignity. We know that a strong public education system is central to achieving individual goals and restoring our nation’s economic strength.

Acknowledging the unjust suffering or her readers, Weingarten paints the selfless public worker as a victim of powerful economic forces and unfair criticism:

The economic crisis was not caused by these people, who every day work hard and play by the rules. The tragic irony is that those who did cause it—the people who presided over the unchecked greed on Wall Street and the recklessness in the housing market—have recovered, while ordinary workers and their families are struggling to survive. Adding insult to injury, as many of you have witnessed in the last eight months, ideologues have made an art of giving short shrift to the workers who protect us; teach our children; care for our sick; and work the day shift, the night shift or the all-around-the-clock shift when—as happened last weekend—Mother Nature threatens. To these ideologues, teachers, police officers, firefighters, janitors and other public employees are convenient fall guys for their own greed, selfishness and irresponsibility.

This pathetic description of workers’ treatment generates ardor for justice and scorn for the attacking “ideologues.” Such passion may well move Weingarten’s reader to volunteer more for union events in the school year just started, when many “school-reform” bombs have been set to explode in districts across America. Increased hours, standards of accountability, and budget cuts may translate into activated members outraged at the social damage.

Weingarten ends her speech as a football coach at half-time, or perhaps George Washington and Thomas Paine did at Valley Forge–she acknowledges the sacrifices and losses, but recalls the noble cause that makes the fighting and the suffering worth it:

We may not prevail every time, but we will never prevail if we don’t take a stand. This Labor Day is a reminder of the values and aspirations we are fighting for, and I thank you for all that you do. Let us recommit ourselves to the fundamental premise that all Americans deserve economic dignity and security, and that we will not rest until we have achieved it.

Those are stirring words to this public school teacher; they build up my sense of ethos. She’s telling me and my union brothers and sisters that we fight for the “economic dignity and security”of all Americans, not merely because our profession is getting screwed.  A lot of teachers probably believe somewhere deep inside that they are heroes. Weingarten’s letter validates the notion. On a day of rest and reflection (the last for a while on the school calendar) from the job, she dignifies it for her audience. Nice.

And one last rhetorical point: when Weingarten broadens the meaning of AFT’s struggle to encompass all our country’s workers–union and non–she echoes the Gettysburg Address final appeal to “the people,” and transcends battle lines and factions.

So score one for the AFT in the rhetorical skirmish. Now where’s the Broad or Koch‘s Labor Day letter?