The technology of music: rock and roll 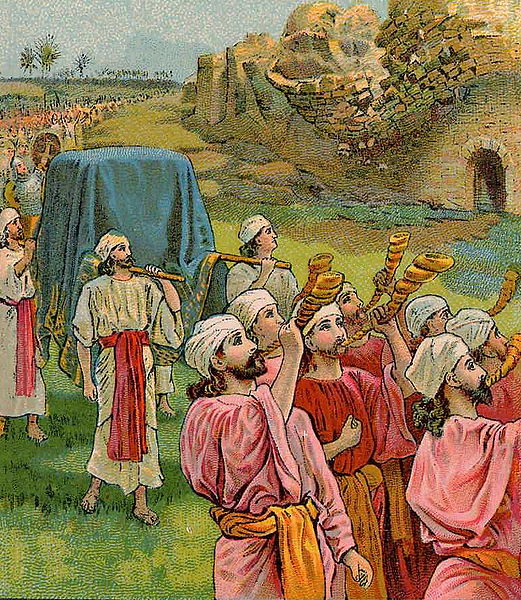 The power of music to powerfully stir human spirits is very ancient, and so it is no surprise that the révolution du moment in Libya has its own version of the Hebrew shofar, or musical instrument that inspired the Isrealites and brought down Jericho’s walls.

oday MSNBC reports that in Libya rock star Abu Assir, described as “reminiscent of a Libyan Bob Dylan” is at the front lines firing up the rebel battle hymns and fighting songs everywhere, are little devices designed to keep up a fighting spirit against militarily-superior government forces.
When they work, these songs are reputed to have game-changing effects, as at Jericho, or with (in US history) the popular songs of the Civil War, like Julia Ward Howe ‘s Battle Hymn, or George F. Root’s “Battle Cry of Freedom“, or on the southern side, “Dixie.” Men “rallied” to these songs–extra energies were exerted, maximum effort provoked.
I have not heard the tunes yet, but I’m sure they have what all such effective devices have had:

How well are his lyrics and rhythms working? According to the description, “Several dozen rebels crowded around as he sang, clapping their hands and joining in. One rebel enthusiastically fired his AK-47 in the air.” 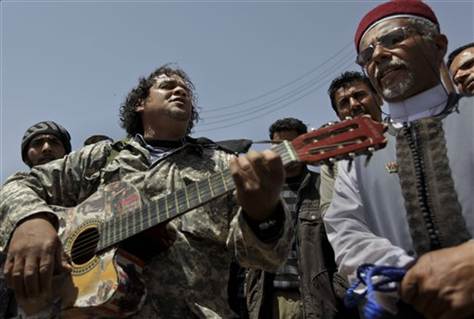 So he is definitely exciting the fighters (success) but the preliminary discharge of weapons cannot be good, can it? (fail)
And one more troubling aspect of this message (for the USA): the soldiers Assir is so exciting are hearing the lyrics, “We are coming. Obama is coming,” promising a US intervention. Abu has a motive for our president, too. He says, “it is time for Obama to take his revenge on Gadhafi.” Revenge? He’s been a “good guy” for the last 8 years or so.
Yikes. The last thing we need in this country is another foreign war that negatively affects our economy and doesn’t appreciably improve security. But if the rebels Assis is inspiring go down in defeat, they will take a negative “brand” for the USA with them now.
Darn. That’s another output of music: an powerful melding of real fact with raw feeling.