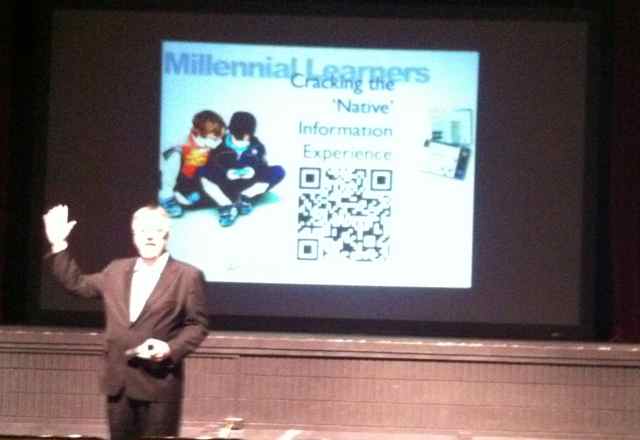 David Warlick’s “Cracking the ‘Native’ Information Experience” at the District 219 Technology Conference in Skokie, Illinois today offered educators insight into working with the amazing young people who are coming into our schools.
These kids amaze the old teachers because they have abilities and dispositions unknown when the teachers were students. The kids have expertise on devices that only existed in science-fiction a generation ago. Even Generation Y teachers are amazed at the skills and attitudes of the next generation, which does not know a non-wired existence. What should educators do to help them learn? AS he put it, how can schools “hack” into their culture to create “effective and relevant learning experiences”?
Warlick offered four traits that an effective 21st century should have to connect with this generation of learners. The successful curriculum will:

At the end of such a curriculum, Warlick states, learners would be “educated” to teach themselves and team up with others to accomplish great things. This education, he said, is not “a race to the top,” but “joyfully mastering the future.”

“Joyfully mastering the future.” I’ll take that over the zero-sum games of Obama/Duncan. Their “Race to the Top” has much in common with The Hunger Games when you think about it.  Warlick’s vision, on the other hand, is humane and practical.