iPads find their use, as did the Microwave 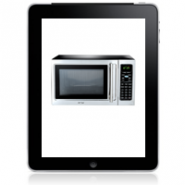 From techinc.com comes this appreciation of the iPad–neither conventional desktop computer, nor netbook, but something in-between and different, for which users are finding appropriate uses.  He compares it to the microwave oven, which will never be used for fine dining, but which has proven to be perfect–the right tool for the job–in certain settings–hotel rooms, for instance.

It reminds one that there is room for new products in the spaces between existing technologies. Guay describes the iPad as

…a new form factor that makes computing more accessible to more people than ever. Sure, you might not create a new app on it, and there’s still not Photoshop on iOS. You can’t bake a medium-rare roast in a microwave, either. But now instead of waiting for your computer to boot, you can read the news, type a short document, and get on with your day all in the time your aging desktop takes to boot. And for millions, it’ll be their primary computing device; there’s simply no reason they need email to be more complicated than a couple taps and a device that runs days of normal usage on one charge.

It’s this same ease of use–immediate gratification and a range of simple applications–that are making the iPad the device of choice in many schools looking for an affordable 1:1 computer solution.