Calling Justicia: Keep Gradgrind and Bounderby away from schools

Discussing the loss of collective bargaining with a friend, I stated in haste that if organized public labor left the table, “all voice for justice” in public education  would go missing. He called me on that too-broad usage, and I clarified in a response I post here, since it relates my current thinking on the value of public employee unions. 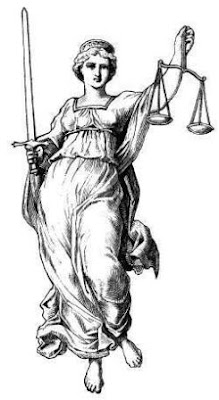 I didn’t mean to say “all” voices for justice in the issue would be gone–just the one from the poor end of the table, the counter-vailing force to corporate interests. I apologize for not being clearer in my reference to Hard Times: it was not to the penury of 1950s teachers, but to the exploitation workers have always experienced at the hands of base or dishonest bosses–public or private. As you conceded, unions have blunted the sharp edge of organized avarice in the past. Business-interests–so boldly championed in  the naked strategy of Governor Walker t to break the union–need some kind of check for there to be balance, a feature of what I meant when I used the word “justice.”

The field of public education is under assault by current data-driven, assessment-crazy types determined to make money off by privatizing. They remind me of Messrs. Bounderby and Gradgrind from 1854 satiric novel. And without the measure of economic and social justice that unions can provide, workers–and of course, students–might suffer fates akin to those of Louisa and Sissy. Finding himself opposed in 2011 by  the vast resources of wealthy corporations iin political campaigns, the unaffiliated working man of today might wisely pool his resources and, motivated by self-interest to be sure (hoping for maybe a decent “pay-back” for his years of public service–and benefits no more generous than military pensions, which are not being questioned–since federal?), his union supports agreeable politicians. Not entirely fair? Yes. But until money is taken out of politics…

To the statement that the public has no incentive to exploit teachers, I would say, normally, yes, except to trim public expenditures, and with today’s crushing deficits that impetus has huge power. Laying-off or  “pink slipping” rafts of teachers, going after fat cat salaries like mine via tenure and seniority law reforms, and taking away collective bargaining–these makes total sense to injured people looking for an angry fix. There’s psychological relief in it. Does history not teach that it’s easy to divert the anger of the dispossessed to those who can be made to seem to be doing too well? Scapegoating. In a milder form, couldn’t one claim that public employees, and teachers especially at this moment, are today’s Jews? (Pardon the grandiose/dramatic associations, but I feel this is a critical moment).

You say correctly that “education achievement” of US students has dropped since the 50s, but to correlate that to the rise of unions is illogical. No one seriously suggests a causal relation between unionized faculties and a“fall” in US student “achievement. “ The causes of lower than desired scores are well researched and determined and include mundane things like poverty and unemployment, not unionism (the zip code correlation mentioned earlier). Unionized and non-union Chicago Public schools do no better than unionized public schools, check it out.

Besides, why don’t we question the premise of our trusted evaluations? How valid is it to measure US students against high-stakes tests performance and call it learning? What do those tests even show? What does it mean that a cohort of disciplined Shanghai Chinese students  were able to beat the rest of the world in 2010? Or that Finland’s or Poland’s students do consistently? Before freaking out about the low rankings, people should be interrogating the value of what is accepted as educational capital, clarify what they mean by “achievement.” Only then should they finds ways to measure. But use the SAT or the PISA? Really? The corporate Testing-Industrial Complex has huge incentives to privatize public ed. People need to connect the dots.

Don’t believe the global rankings either: good learning does happen in American public schools, but it needs money to run well. Accept the conventional view that America’s post-secondary schools are the global best? Then compare the increase in colleges and universities spending since the 1950s to that in public schools. Not even close. How much of the global “achievement” gap in school scores could be mitigated by fully funding them? These are questions we should be asking.

To those who question the justice of offering fiscally attractive packages for teachers, consider the long term benefits one effective teacher provides taxpayers–s/he prepares the successive generation, our progeny, or most precious capital. Nothing less than the perpetuation of civilization is at stake. How should this socially valuable service be valued? Is a modest pension (most retired public workers I know continue working in order to maintain their lifestyles) too much? Compare the highly-proficient public school teacher to one of the 13 hedge fund managers who played casino games  with everyone’s money and last year scored sufficient bonuses to fund 300,000 teachers. I’ll say it plain: the ratio between these compensations does not square with my concept of economic justice. Don’t get me started–neither does most CEO pay I read about. It seems ridiculous. And yet who is a villain when times get hard? Curiously, it’s the teacher. Yep, we’re being scape-goated.

It  disappoints me that society doesn’t value my work more than it does. Diane Ravitch just tweeted, “That which we value, we treat with honor.” How honorable do our values show us, the adults? And what message is America sending its kids when it goes cheap on their education? What does it say about how much we value our civilization? In an earlier post, you asked for an explanation of the fractional budget of the Department of Commerce vs. that of Dept of Education. Well, which is more important to our present and future interests: The provision of the nation’s entire GDP through equipping the next generation to take its part in the nation’s economy, or the regulation of marketing of products and services, or whatever the Commerce dept. does? That difference in tax-payer support for the departments seems out of balance, but in the other direction than the one you seemed to imply.

I understand the public’s outrage at the “Law’s delay, the Insolence of Office” as much as anyone. Get rid of the bums. Run every public ship according to maximum efficiency. Perhaps pols have been too generous with these increasingly long-lived retirees (though your characterization of these deals as “crazy” seems unwarranted). But let’s be adults and have that discussion as a society; let’s put cards on the table and negotiate new terms. My union, for instance, is like many nowadays bargaining for a freeze in salary. We’re reasonable. And my union president, Randi Weingarten, is all about, “let’s do whatever’s necessary to clean up the ranks” in her latest pronouncement. Conscientious teachers are proud of their profession, and have an incentive to improve their craft, as it could be argued that doctors or lawyers do in our society. One proposal that I would endorse is a new, more rational selection process for tomorrow’s teachers, one that at the college level mirrors what happens in med schools. No more bottom-trolling Ed schools for our kids’ and grandchildren’s teachers. Sad truth: the average American public school teacher comes from the bottom half of his/her academic class. That should change, and other reasonable things.

The point is there are work rules that can be rewritten, quality and economy reforms to implement if workers and their employers (the people of the state through their elected representatives) sit down and work together. But respect the game. Don’t refuse to negotiate or hold public discussion; don’t take away the very potential to negotiate through collective bargaining. It unjustly hurts the teachers, cops, firemen, etc. who are doing their jobs efficiently.

And don’t miss the opportunity for self-reflexion and growth as a society–what does it mean when the public reneges on its promise to itself? (and its children?) Whom do you sue for breach of that contract?

Move to recess, your honor…