Is it really "Superman" charters we should wait for? 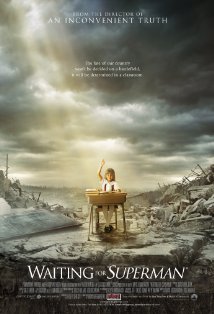 Our society seems to be in a craze to privatize public services. Desperate to seem like reformers, and struggling with anemic public funding, politicians and administrators are looking to “the free market” to take care of what our American fore-bearers had thought too important to put in private hands. The argument goes: capitalism will save the public money while still serving us. The profit motive can be so engineered that there is public good at the end of it. It sounds like the best of both worlds, American-style:  private gain and public wealth accrual.

Because of the panic material crises bring, there is no discussion of why essential public services were deemed matters of “public trust” by our parents and grandparents, who believed things like fire and police protection, the military, and schools were so important that everyone should be responsible for them. But lately in the USA, it’s more like, “No, let’s start saving money now.” Let tomorrow deal with any negative consequences to our democratic republic.

You can see what has been happening all over.  In LA county, privatizied libraries are popping up–ignoring the democratizing and acculturating qualities of these old American institutions (hello, Ben Franklin, don’t look now); in our federal congress, legislation to privatize social security are popular; numerous states have privatized their prisons; in our military, over half the operatives in theaters of war–Afghanistan and Iraq–are working not for Uncle Sam but some private security or services firm; and in Chicago, Mayor Daley decided in 2009 that for a big short-term cash payment, selling our parking concession was a good idea for the next hundred years.
In public education, the zeal for privatizing has gone apace in Chicago, where charters are what usually replaces “turned-around” (because officially deemed “failing”) public schools. This means that public tax dollars had beeen going to local schools are instead going to out-of-state corporations who manage the schools like a business. These corporations promise bigger learning for less money. Who would be against that?

Chicago, in whose public high schools I did my student teaching, is a good place to dwell when considering Davis Guggenheim’s Waiting for Superman, which I finally got to see yesterday. That’s because the film is an exquisitely-timed propaganda instrument for advancing the privatization of public charter schools. Though the film’s message resonates with a cash-poor and desperate public, it does not make sense. Very simply, the Superman charter school experience in Chicago does not show that they offer any better learning for less. In Chicago, experience shows that this “Superman” is dealing with Kryptonite-laden problems.

With Superman, my problem was not with the quality of Guggenheim’s film-making. His film had me weeping on cue over the terrible, real injustices these kids and their parents are facing. His narrative was skillful, engaging me with intriguing interviews with parents, the kids, and good guy Geoffrey Canada. The intercuts of classic TV and documentaries were also effective and helped to lighten the mood. What infuriated me was the simplifying of the problem and solution. The problems of American public school are really much more complex than teachers unions = bad, charter schools = good, but that is what Guggenheim’s film offers.

POSSIBLE SPOILER ALERT:  The film follows four impossibly cute kids–three of color–through the excruciating process of trying to escape their failing public schools. Their single and poor parents are admirable in their struggles for their offspring. But their foe–national teachers unions like the NEA and AFT– is evil and unassailable. The only solution to the problem of these good young Americans? The “Superman” they are waiting for, who will save them from a future of failure?  Why it’s charter schools, like KIPP Academies, or a**-kicking teacher-union destroying public school change-agents like DC’s Michelle Rhee.

The last scenes, where the emotional payoffs are, show the devastating defeat handed the three kids of color. (Interestingly, the white kid, from suburban LA and having two parents, wins her lottery.) The little colored kids are all shown as impotent losers of the educational lotto, and by the logic of the film, are thus condemned to be a “failure factory” loser.  According to Gail Collins of the New York Times, “By the time you leave the theater you are so sad and angry you just want to find something to burn down.”

I found myself saddened by the kids’ plight, and angry too, but not at all public schools, which is what Oprah, Obama, Bill Gates, the Tea Partiers, and Guggenheim seem to want the audience to feel. I felt more angry at my fellow Americans, who in their financial straights  seem ready to believe that civil services, that have done a fine job overall for as long as they have been alive, are the place they should take out their frustrated outrage. In their rage and feeling of loss, pro-charter Americans are targeting the wrong culprit, and raising up the wrong champion. The evidence shows that charter schools are not Superman.

Let’s use the Chicago schools example, since the US Secretary of Education is essentially pushing its “turnaround” model on a national scale now. The facts show that private corporations running “turned-around” schools (some of which are “non-profit”) are doing no better, and generally worse than what we have now. This article shows how one “exemplary charter” had mediocre improvement–after five years.  Furthermore, the zealots for privatization ignore that the best schools in the city (as measured as these things are) are not charters but Chicago Public Schools. And where charter schools spring up, union teachers are cut out of the deal, salaries are lower, and employees lose job security and pension benefits, important stabilizing conditions for maximum performance.

In fact, it may be that the charter school “movement” is an orchestrated take-over of the public resource by the industrial-educational complex. The “turnaround model” and Race to the Top (RTTP), according to a recent Huffington Poster, can be seen as a systematic way to bribe and bully real people–students and teachers–instead of helping them grow and develop as they fulfill state promises of a “free, high-quality public education.” This is how Criticallthinker1974 describes the game-plan of the turn-around model:

1. In addition to RTTP, states and districts are offered millions in “school improvement grants” for every turnaround model they utilize.
2. Districts find ways to label a school failing (not hard to do in Chicago, since none of our high schools meet pathetically low state standards) or starve them of resources until they can not operate.
3. The entire staff is fired and the teachers replaced with McTeachers who have one year of training from the same turnaround organization that now manages the school.
4. Despite research indicating how destructive zero tolerance policies are, the turnarounds use them to shed the most challenged students through multiple out-of-school suspensions (as opposed to proven restorative justice models)
5. Everyone forgets about the missing students because they are enamored by the sudden influx of millions of dollars that the school previously never received.
6. Traditional public schools become repositories for LEP, special ed, and low-income students.
7. These schools are then labeled failing and reconstituted into a turnaround or charter.
8. Corporate takeover of public education.

It’s a pretty sinister picture, and yet following the rules of the capitalistic game, perfectly logical for even “non-profit” corporations to behave in such a way.

But let us not, for a moment, cynically assume from the Chicago example that the charter schools movement is intended to “takeover” America’s public schools. Let us suppose that the critics of America’s public schools really want our children to be as the best-prepared on the planet for our global future. What, then, are our global competitors doing to make their schools reputedly the best on the planet?

If we were to call the bluff of the “reformers” who want America’s schools to be number one again (yes, that’s you President Obama), we’d take a good look at Finland, the number one schooling country, according to Superman. But if we looked for Superman up there, we’d search in vain. In Finland (as this article in the Columbia Journalism Review points out), there are no private charters. It is an entirely public system. In fact, those excellent Finnish schools are the result of a rather (dare I say it?) socialized public educational policy that includes treating and paying teachers like professionals, not relying on standardized testing to regularly measure learning, and making sure that kids are nurtured and cared for from the time a mother becomes pregnant–in other words, the Finns invest in the health of their society, the youth of which public schools serve. But although they provide a real model of success for reaching the under-served kids, Superman does no more than show Finnish schools above the USA on its chart and blame bad union-protected teachers for the gap–more evidence of the superficiality of Guggenheim’s argument.

At the risk of sounding like a socialist, I would claim that some social services–like fire, police, education, the military, and OK, I’ll add in health care–are too important to privatize. I believe that removing ourselves, the public, from these important social functions only leads to lower quality services, a degradation of democratic republicanism, and more “victims” like the kids in Guggenheim’s film.  No one wants to hear this message, but it is the flipside of the freedom coin. The Superman our schools are waiting for is–ourselves.