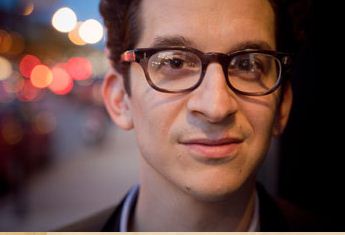 This was not a traditional performance venue. But“Chicago’s best dive bar, established 1958,” hosts the Josh Berman Trio every Monday night at 10. Josh is a good example of the up and coming players–he’s in his early 30s–who will populate the Chicago “jazz scene” as the generations of former players of a still-evolving music die off. Josh is an auto-didact who writes amazing jazz originals, but the interesting thing is that he’s also very traditional, using forms and sounds that go back at least as far as the Hot Five of Louis Armstrong.
I want to devote more space another time to the technology of music, but could it not be said that every musical genre “works” by imposing certain rules on the players–certain conditions by which they must play? How the players cooperate within the contraints of the genre determines how much they succeed. Berman and his fellow players embrace the old strictures and transcend the traditional forms, succeeding magnificently in creating new jazz.

Berman’s trio rocks the place. The sound is constrained by given melodies and tempoes, but each player goes off in interesting, angular directions that are pleasant to the ear. Especially exciting is when Berman evokes strange “non-musical” sounds–animal like slurs and blurts–and incorporates them into his solos. Real traditionalists, each of the players’ deviations do not stray far from the song.  My friend Mr. Kamka was able to identify their numbers– “They’re doing one by Theolnious Monk now,” but I lack the ears to hear these “modern” frames of reference. Instead, the playing and arrangement of chords in progression evoked 1925’s “Sweet Georgia Brown” –albeit with lots of amazing instrumental deviations–to my ears. His group thus reaches the non-jazz sophisticate as well.

When he accompanies, vibes player Jason Adasiewicz puts down a harmonic wash of sound that perfectly counter-points the other players. But when he solos, he dances frenetically over his machine, making an exciting blizzard of harmonic, metallic sound. Heavy metal, indeed!

In his highly energetic playing, Adasiewicz reminds me of another function of jazz for the player (and thus another element of the technology of jazz or music):  aerobic exercise. As the music rolls out along disciplined lines, so does his personal practice; he gets a very good “work-out” of his leg and arm muscles. You can get some sense of his playing in this youtube performance of his “Rolldown.”

Finally, I must mention the decor of “Chicago’s best dive bar”:  it is all artistic. When you are in the mood for a dark, reflective libation, this is the place to hang. The staff hardly talk to you, leaving you time to take in the rows of portraits that line the walls–Chicago artistic dignitaries and Second City alum of the past fifty years are discernable. Among the Second City alum are John Belushi, Stephen Colbert, and Bill Murray. Among the literati, Mike Royko and Roger Ebert, depicted here as taken from my phone camera. It hangs next to the tiny bandstand, and so my favorite current Chicago writer (and terrific Tweeter) has his place in all the performances. 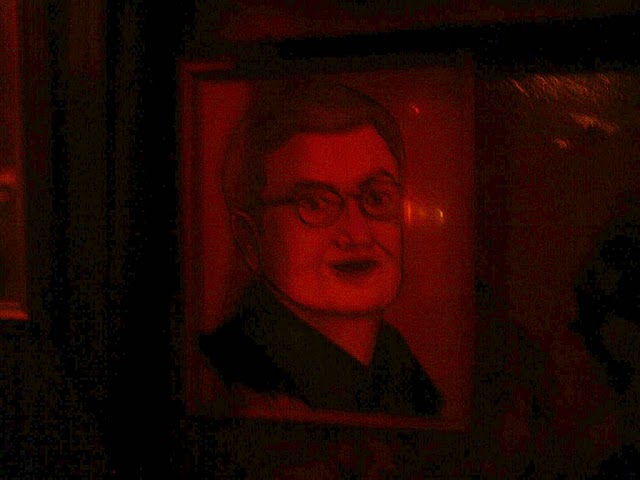 Besides the portraits, there is a  beautiful wall of faces that were painted fifty years ago, sealed in tobacco smoke, and currently peer out at you from behind coats of protective varnish. They each look at you and while some seem very famous, they all look familiar to you:  these are people in your tribe, other human beings who came to this public house like you have–seeking a retreat from the streets and perhaps community.  There is an eerie communion going on.


And above the bar currently is an obscene set of paintings that depict the obscenities of modern political corruption. And yes, Rod Blagoyovitch is among them, imagined as he enters prison–more fuel for reflection.


I highly recommend a visit next time you’re in Chicago.

photos from jazzreview.com and joshberman.net