How is this night different from all others? 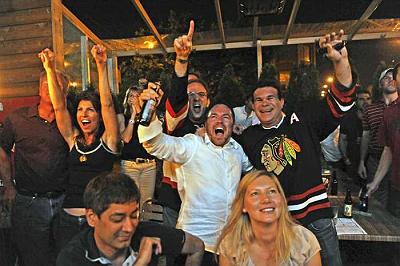 (photos courtesy of the Chicago Sun-Times, the best source of local sports coverage.)
For the first time in my life, the Chicago Blackhawks win the Stanley Cup, and the social environment on my placid suburban street explodes with yelps and screams of delight and release. It is because my apartment is located between two sports taverns, and there are people reveling now who have waited their entire lives for this.
Car horns go off in long bleats, fireworks pop, “Oh my god!” exclamations erupt from guttural places. Occupants of cars yell greetings to each other and finger-waving (“we’re number one!”) pedestrians. The peace of a weekday night, and no cops get called. This night is different from all others. On this night, the perennial loser has been shown to be–hurray! of course!–a winner, too.
It is a night for satisfied reflection and sighing–a long road has been traveled, a sought-after destination reached. Guys who plan and train for months feel this way when they reach a mountain summit. So how can people who aren’t directly involved in the project be so moved? What is it that makes the the sports team a vehicle for the “esprit de corps” of an entire community? I believe it is in the way the team harnesses ancient community feelings–tribal, one might say “primitive” social motives are at play.

Otherwise how to explain guys who don’t have jobs (or who have jobs entirely unrelated to the game or the highly-skilled specialists who play it) being so affected? How do these jamokes feel so strongly that a big victory in this game means a victory in their own lives? It must be the magic of social transference, the mob equivalent of an orgasm, a way to sublimate and release the passions of “civilized” community members. As I write, Spring Rd. has erupted into a crazy spontaneous parade. Girls scream “Woo-oo-ah!” It is their white suburban equivalent of the joyful ululation of arabic women.
An entire sector of society–an entire mob of people is set loose; strangers in other contexts, they feel united tonight in one spirit. As their theme song blasts on car speakers, they take to the streets in proud, loud demonstration–”We are here! We’re happy! and you should be too!”  They are saying–though not in so many words. What one might observe here is a line of social capital transactions that go from the individual to the group to the larger social entity and back to the individual:

Let the people “go wild;” let them scream their delighted release.  One senses years of pent-up, frustrated exuberance in their screams. On any other midnight, the loudest noise is the argument of drunkards walking home from the bars.  Tonight, though, the Blackhawk fan has come into his/her own. A time of ecstatic release has come. Let him/her enjoy it. It may never come again in one’s life.

And tomorrow and going forward, they will be, perhaps, happier people for this night. The tool of the team has done its job.

2 responses to “How is this night different from all others?”