So, I'm finally getting the chance to take a "blended" class

and so far, so mandatory.

But that’s not a bad thing, necessarily. I bet that I learn a lot. My expectations were for something more exotic, I guess, but our prof had a lot to impart in a little time, it being only one of three occasions that would find the entire 12-strong class together. She needed to make the cohort jump through several initial hoops before our four hours of face-t0-face (ftf) time expired. The other five sessions will happen via Blackboard, which on their server at least (through my Firefox-running Mac), is insufferably slow (see bullets below).

The course is one of those bread-and-butter graduate US education classes, “Curriculum Construction,” and is being offered at the largest non-public grad program in the state, so one hopes that servicing the crowd has made them good. The trick will be in getting us to understand the concepts in isolation from the definite time/space of the classroom, and then to demonstrate our skills in a way that both the prof and our fellow students can easily learn from. 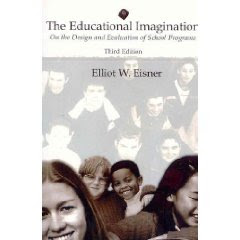 Our first assignment was a perfectly appropriate mix of old and new: we are reading from Elliot W. Eisner’s The Educational Imagination, published in the early 90’s, before the higher speeds and web 2.0 tools existed (OLD). But Eisner’s subject is still news: he’s writing about the perrenial curriculum arguments between progressive Deweyites and “efficient” Thorndikians, started more than a century ago and present today in the data-driven and the student-centered (NEW). We’re discussing these old ideas via online posts (albeit isolated from the rest of the internet) (NEW).

Stay tuned to this blog for further reflections on my studies (official now) in educational technology. In the meantime, to whoever care, I humbly offer these
Recommendations: