There's blood on the schoolroom floor 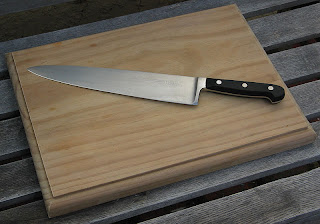 The budget ax has fallen on six of my colleagues. This in a department of 21. They got sliced with the RiF blade, all in the space of few days. It should have been one day–a clean cut eliminating a faculty, as in Rhode Island recently. But here district butchers were dull, or perhaps insidious, and sent mixed messages leading up to their bloody work.
There was a public recommendation the School Board accepted that signaled at most 2.2 RiFs. There was an official memo that promised notice by a date certain that had already arrived. There was hope that our excellent team would endure till Spring Break and beyond, into another good school year.  But they amputated those hopes over two agonizing days–and over a weekend.

A colleague who has been in Corporate Land says there is a protocol in place at established firms. It makes the unsavory process of chopping a human from his/her livelihood and life-ambition more regulated, efficient, and thus somewhat “kinder” to the subject. You fire on Fridays, and have security escort the workers out. “If it were done when ’tis done, then ’twere well/It were done quickly” says Macbeth,a guy who knew a thing about cutting people.  Administrators in our corner of a caring profession executed their notices at the last possible hour, beyond the time they had told people they would have it done. And so there was blunt force trauma, too, to the psyches of these brave young professionals who somehow keep showing up ready to do their best.

There is a technology to human resource management, and the one used here seems to me primitive.

I suppose that one positive this horrific wounding has brought our department is a certain sense of community, of “us against the world,” and a collective urge to speak out our grief and outrage. At the end of the day, we feel angered not only at the way these young professionals were severed from their careers, but at what it says to us about the short-sighted interests of the American people, most of whom can no longer afford to fully fund schools. When a vibrant and promising young department is cut off as it buds, what’s hurt is more than morale and livelihoods.  What’s hurt is the future–our progeny.
Kids are going to bear the scars of these cuts. Almost certainly they will end up in bloodier and more brutal places than if we their parents had chosen to full fund high-functioning schools. And that is what really makes one angry.
image courtesy search.creativecommons.org